While many in the housing market are predicting a shift in power to buyers’ favor, that switch may not be coming anytime soon to according to a recent NerdWallet report due to tempered demand due to higher mortgage rates.

In addition, home affordability hit another low for first-time buyers during the second quarter of 2022; though inventory was up, the combination of climbing list prices and still stagnant wages means more borrowers are struggling to afford the homes that are on the market.

All of this comes at a time when mortgage rates topped the 5.5% mark recently, so many would-be buyers have decided to sit in out for now that the interest on their current home would cost more.

But according to NerdWallet, the slowed demand will eventually affect list prices, but as of the second quarter, that effect on the market has yet to materialize based on the latest numbers.

“Average asking prices crept higher again in the second quarter. Paired with wages that aren’t keeping up with inflation, homes became less affordable,” said NerdWallet author Elizabeth Renter in her report. “A long-held rule of thumb is that home shoppers should look at properties priced roughly three times their income. That has become near-impossible for many people.”

“Homes were listed at 6.5 times the typical first-time home buyer income in the second quarter across the most populous 50 U.S. metros, and 6.6 times their income across the nation. Both of these top the highest rates we’ve seen in the two-year duration of this analysis, previously bested in the first quarter of 2022.” 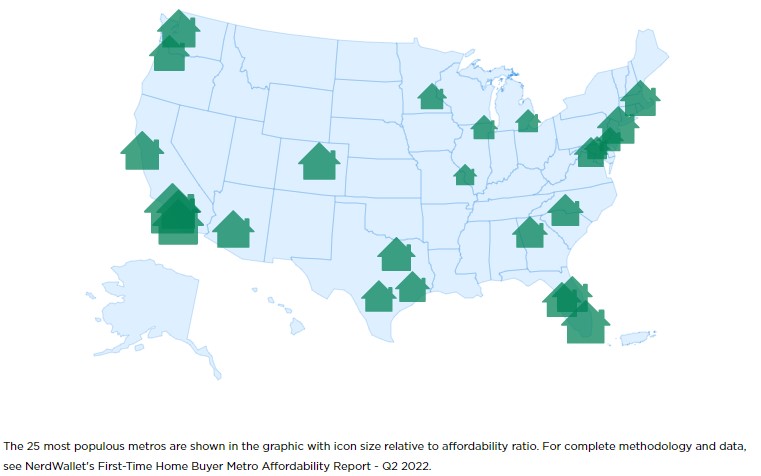 For another quarter, homes remained largely priced out of reach for first time buyers in the second quarter of 2022.

Among the largest cities, Pittsburgh remained the most affordable area for first-time buyers as homes there were listed at 3.3 times the typical income of a first-time buyer. Other affordable metros in the second quarter were: San Diego (10.8 times median income), San Jose (10.3x), Miami (9.9x) and Sacramento (8.8x).

Inventory rose in the second quarter as the average number of listings are up 51%. 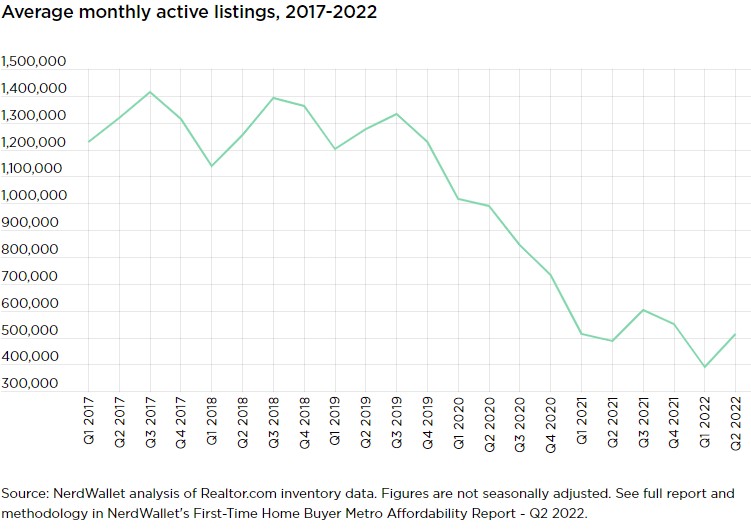 “It’s not unusual to see inventory climb in the second quarter as we move into the typical homebuying season, but this rise could be more than just a seasonal shift,” NerdWallet said. “Paired with slowed demand due to higher interest rates, more listings could moderate prices. Even so, with the second quarter increase, there are still only half as many listings on the market as there were pre-pandemic.”

But knowing all this, NerdWallet says “buyer beware” as mortgage rates hit highs not seen in over a decade, resulting in fewer bidding wars and fewer homes selling for thousands above list price.

Click here to view NerdWallet’s report in its entirety.

KANSAS CITY, Mo. — The Amtrak Missouri River Runner service, traveling back and forth between Kansas City, Missouri, and St. Louis, is shifting its service from two trips between the cities per day, … END_OF_DOCUMENT_TOKEN_TO_BE_REPLACED

KANSAS CITY, Mo.  — A new development could soon make its way to the Waldo neighborhood in Kansas City, Missouri.“Waldo is like one of those perfect little gem neighborhoods,” said Will Kivinski, who … END_OF_DOCUMENT_TOKEN_TO_BE_REPLACED