House prices in the United States are being pushed up by pension funds that are outbidding middle class families and purchasing up to 24% of houses in some areas they then rent out, according to a new report.

The outlet highlighted that investors, rather than young Americans, are benefitting most during an era of the cheapest mortgage financing ever while inflating home prices at alarming rates. Rents are also rising as home prices increase.

Rather than letting young homebuyers have a chance at the homes, investors are snatching up the properties and reselling them at a premium or renting them out – often to tenants unable to afford to get on the property ladder because of rising prices.

The consulting firm noted that home prices rose 11% in 2020 even as the COVID-19 pandemic raged. Home prices will rise another 12% this year and another 6% in 2022, the company estimated.

The Amber Pines at Fosters Ridge subdivision in Conroe, Texas, pictured, was sold to online property-investing firm Fundrise in December 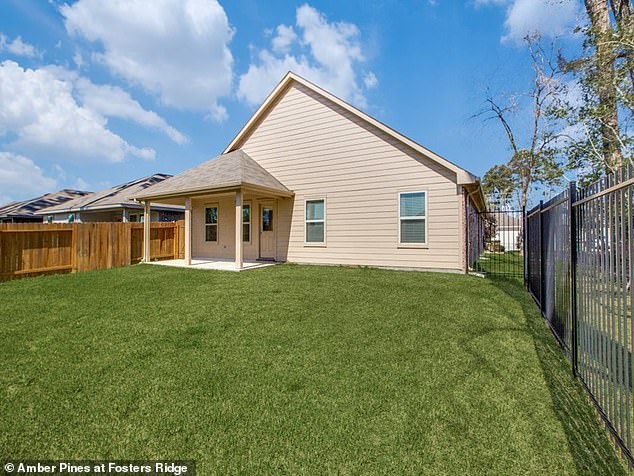 The Amber Pines at Fosters Ridge subdivision in Conroe, Texas, pictured, was sold to online property-investing firm Fundrise in December

John Burns, the consulting firm’s CEO, estimated that about 20% of homes sold in top real estate markets are bought by someone who never actually moves in.

The outlet detailed a particular instance in Texas as an example – when a bidding war was started after a home developer put an entire community for sale in December.

D.R. Horton built 124 houses in Conroe, about 40 miles north of Houston, and called the community Amber Pines at Fosters Ridge. The homebuilder then put the community up for sale sending investors scurrying to Texas.

Fundrise LLC, an online property-investing platform, won the bidding war and purchased the entire community for $32 million – twice what D.R. Horton may have made selling the homes directly to families, according to The Wall Street Journal.

‘We certainly wouldn’t expect every single-family community we sell to sell at a 50% gross margin,’ he said.

In other areas – like Miami, Phoenix and Las Vegas – investors are intentionally purchasing homes under $300,000 and in decent school districts where young adults would start their families, according to the outlet.

In the Houston area, investors have recently bought 24% of homes on the market before young homebuyers had the chance to own their first properties.

‘Limited housing supply, low rates, a global reach for yield, and what we’re calling the institutionalization of real-estate investors has set the stage for another speculative investor-driven home price bubble,’ the firm said.

A chart from the Federal Reserve Bank of St. Louis shows median sales price of houses sold for the United States each year since 2005

The pandemic sparked a race for home-office space and yards, with Burns counting more than 200 companies and investment firms competing.

As a part of the venture, the investment company recently purchased rental-home communities across the southeast, The Wall Street Journal noted.

Lennar Corp., another large homebuilder, recently announced it would supply $4 billion of houses to the investment firms Centerbridge Partners and Allianz in a new partnership.

On Thursday, Madison Realty Capital closed on a $110 million loan for a project in Los Angeles. The original plan details did not include rentals, but now 220 of the nearly 700 home sites will be sold to investors.

Josh Zegen, a managing principal at Madison Realty Capital, admitted: ‘A lot of things that would have been for-sale housing are going to be for-rent housing.’

The Missouri Association of Realtors, an organization that spent millions in recent years on two successful initiative petition campaigns, is warning lawmakers it will oppose anything more … END_OF_DOCUMENT_TOKEN_TO_BE_REPLACED

Support your neighbors with Missouri-made gifts In the summer of 2020, when the pandemic had shut down local businesses statewide, the Rural Missouri staff got a call from Farmers’ Electric … END_OF_DOCUMENT_TOKEN_TO_BE_REPLACED