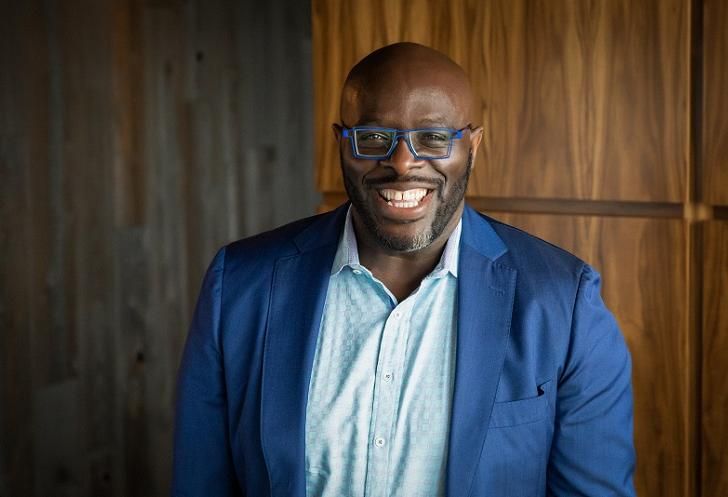 This series delves into the myriad ways people enter the commercial real estate industry and what contributes to their success.

Football gave Hugh Williams his shot at a commercial real estate career. A former inside linebacker and co-captain of the Northwestern University Wildcats, he had discovered a teammate had a father in the business, and soon after completing several degrees, that connection helped Williams find work as an industrial broker.

Several decades of experience showed him that without such connections, Black people have found it tough to break into the industrial sector. Williams’ latest gig means he can now do something about it.

Developer Sterling Bay wants to deepen its partnerships with minority- and women-owned businesses, according to Williams, and earlier this year, the firm brought him on board as its director of strategic growth and entrepreneurship. Sterling Bay wants him to do more than simply boost the level of minority participation in its projects, which includes Lincoln Yards, an effort to remake a stretch of the Chicago River’s North Branch into a $6B mixed-use community. Instead, he’ll forge partnerships with midmarket MBEs and WBEs, which could involve Sterling Bay becoming partial owners, giving these growing businesses access to capital and expertise that will outlast any single project.

Williams already wears many hats. He’ll continue as managing broker and principal of Chicago-based MK Asset Management, where he helps oversee a $100M real estate portfolio. And as co-owner of Circle City Rebar, an Indianapolis-based fabricator of steel rebar, he’s also an entrepreneur. But with Sterling Bay, he now has a chance to fulfill his top career goal in the industry: becoming a coach as well as a player.

Bisnow: How did you get introduced to CRE?

Williams: I was introduced to the commercial real estate industry by Harvey Shein, a decorated Vietnam War veteran and the father of one of my Northwestern University football teammates, Geoff Shein. One day I asked Geoff what his father did for a living — he said he was a real estate developer. As it turned out, he was the managing partner of a 600-unit apartment complex that sat directly across the street from my high school, so I leveraged the coincidence to make a connection. To this day, Harvey is not only an influential mentor but has become one of my best friends.

Bisnow: What was your first job in CRE?

Bisnow: What kind of education, certification or official training do you have in CRE? How critical was it to landing your first big role?

Williams: I took a CCIM course and I am an active member of the Society of Office and Industrial Realtors. Aside from that, I have a master’s degree from Northwestern. I don’t have any real estate-specific designations or certifications and consequently they have played no role in the advancement of my career.

Bisnow: What is one skill you wish you had coming into CRE?

Williams: I probably should have taken a course on how to use my HP 12C [calculator] properly. Analytical skill sets are very helpful in this business. For example, understanding modeling, underwriting and having an ability to synthesize data all would’ve helped to shorten and enhance my learning curve as I got started in the industry.

Bisnow: What were you doing before you got into CRE?

Williams: Before I got into commercial real estate, I was playing football in Paris. After I graduated from Northwestern, I played “professionally” in France for a year. Upon my return stateside I started a small computer leasing company that I was not quite prepared to run at the time. I’ve always had an entrepreneurial mindset, mowed lawns as a kid — real estate was a natural fit.

Bisnow: Can you remember a moment where you felt in over your head or you worried this industry wasn’t for you? Did you ever think about quitting? What changed?

Williams: Over my head? Never. It is an unconventional business, especially for a naturalized citizen with immigrant parents. I’m sure taking a job that didn’t pay well was probably not looked upon with great zest by my mom and dad. As a young broker, almost everyone thinks about quitting at one point or another because you haven’t built up any cash reserves and the entry-level pay is nonexistent. I remember paying for gas at the corner of Belmont and Racine with quarters one morning early in my career — luckily, I had a commission coming in that Friday, so I figured out how to make it work. Despite that, I never truly considered quitting — commercial real estate is one of the last truly inefficient markets on the planet and if you’re nimble, you can position yourself to win in a way that’s not possible in conventional selling.

Bisnow: What were your early impressions of the industry, good and bad? How has your impression changed?

Williams: At the onset, I thought commercial real estate was an opportunistic industry, and that the industrial sector allowed for a wider variety of transactions — build-to-suits, land sales, investment sales, etc. I realized very early on that the same type of person was being hired over and over again and it wasn’t Black males like me. It’s telling that a Black man with dual degrees from Northwestern, captain of the Northwestern football team, a letter winner in wrestling, is the only Black industrial broker I can recall at any of the major firms in Chicago. Industrial real estate is a great business. I admire manufacturing and distribution business owners, there is a palpable energy you feel in a plant or a warehouse that screams the American dream.

Bisnow: Have you had a mentor or sponsor? How did that person shape your future in CRE?

Williams: Throughout my career, I’ve had the chance to work with some great brokers, but my strongest professional influences have been my family and a fantastic set of friends. I believe Emily Dickinson when she wrote “My friends are my estate” — I have extraordinary friends who are leaders in business and who have always given me meaningful advice and, more importantly, set tremendous examples of how to conduct myself. As a result of their generous guidance, I welcome the opportunity to bring people along with me, have someone say ”that Hugh Williams guy played an important role in my career” — I’d like to build a coaching tree. I think you can point to any number of successful people, and they’d tell you that along the way, someone brought them along, advanced their career, looked out for their future. That will certainly be a component of my legacy. One of my mentors said to surround yourself with positive and optimistic people. I try to be a positive force.

Bisnow: What is a key lesson someone taught you, either kindly or the hard way?

Williams: Keep your clients at the forefront, keep fighting for them, think critically, be creative and understand that they are looking to you to lead them in the right direction.

Bisnow: What do you warn people about when they join the industry?

Williams: Be your own person, set your own moral compass.

Bisnow: If you could do your career all over again, what would you change?

Williams: If I could get in the Way Back Machine, I would have gotten into investment sales at the outset of when industrial was becoming an institutionalized asset class and then bought land in every port of entry in America — and I definitely would have bought Amazon and Apple stock with my early commissions!

The word of the day is "upskill." You'll probably be hearing a lot of it when it comes to employers as they provide additional training for their staff."This is an employee market now," said Christine … END_OF_DOCUMENT_TOKEN_TO_BE_REPLACED

All through his campaign for the presidency, candidate Joe Biden promised as president that he would use every tool at his disposal to curtail private gun ownership. As recently as April, President … END_OF_DOCUMENT_TOKEN_TO_BE_REPLACED

The Sports Castle building in Denver. (Photos courtesy of Non Plus Ultra) A California-based firm is looking to bring life to some of Denver’s more prominent vacant structures, but only for a limited … END_OF_DOCUMENT_TOKEN_TO_BE_REPLACED