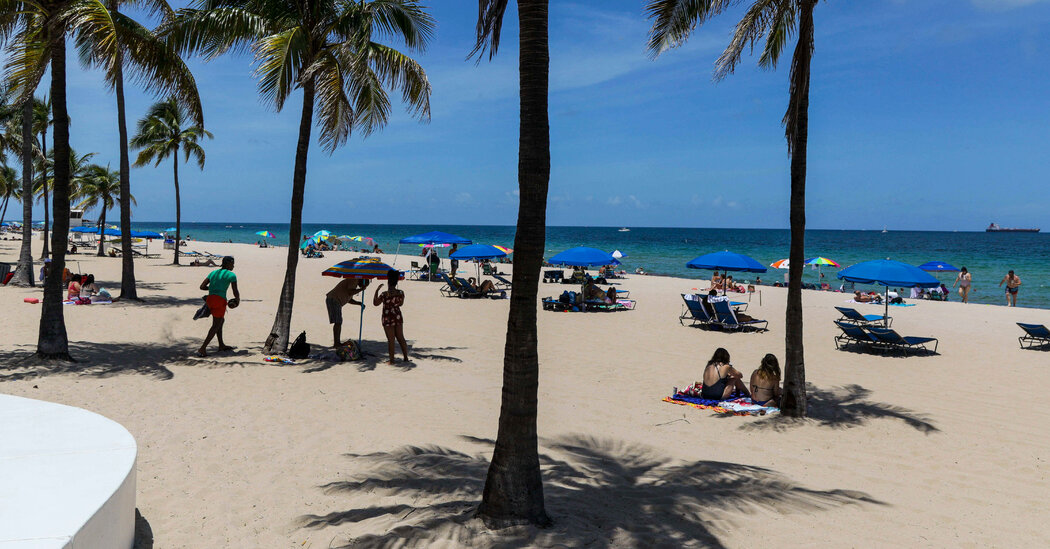 It took the developers Kathy Ireland Mitchell and her husband, Andy Mitchell, 17 years, two partnerships, 476 community meetings and eight redesigns to build an exclusive residential condominium in Fort Lauderdale on the site of Ireland’s Inn, a much-loved hotel founded by Ms. Mitchell’s family.

Developed by the Fairwinds Group, Fortune International Group and the Related Group, and designed by the architecture firm Nichols Brosch Wurst Wolfe & Associates and the interior design studio Meyer Davis, the $400 million five-acre development made its debut in April 2019. The north tower’s 57 residences, ranging from 1,627 square feet to more than 5,000 square feet, sold for $1.4 million to over $9 million.

The last of the 114 residences in the 22-story south tower sold out recently with prices from $3.1 million to $4 million (homeowners association fees are around $3,400 per month). One- to three-bedroom units, covering 2,776 to 3,500 square feet have amenities that include ITALKRAFT cabinetry, Wolf and Sub-Zero appliances and dual balconies with views of the Atlantic Ocean and Intracoastal Waterway.

“In Miami, these units would sell for $3,000 a square foot as opposed to $1,200, so there’s a lot of value,” said Patrick Campbell, executive vice president of the Related Group’s condo division.

Fort Lauderdale long held a reputation for spring break because of the hundreds of thousands of college students who stampeded the city in the 1960s and ’70s. In the late ’80s, the City Commission started campaigning to attract a well-heeled demographic. Bonds were issued to improve infrastructure along the beach and riverfronts. Old motels gave way to glossier hotels like the Ritz-Carlton and W Fort Lauderdale. Now, high-end residences are on the horizon.

These new condominiums come with sought-after perks. At Auberge, residents have 450 linear feet of beachfront, an underground 600-car garage, a glass lobby anchored by a multimillion-dollar Fernando Botero sculpture, an indoor-outdoor restaurant overlooking the ocean, a 16,000-square-foot full-service spa and two pools with ocean views.

“A good portion of our residents are local empty nesters who’ve sold their homes and are now fulfilling their dream of living on the beach,” Mr. Campbell said.

Lori Zuckerman and her husband, Leslie, are one such couple. They lived with her two children in homes in Boca Raton and Fort Lauderdale, but they always fantasized living on the beach. When Auberge came on the market they weren’t ready to move, but they visited the sales office and “that was it,” Mrs. Zuckerman said.

They chose a 4,440-square-foot corner unit with over 1,000 square feet of outdoor living space. “You can see boats going by on the Intracoastal and the ocean on the other side,” she said.

“I thought I would miss my house, but I don’t,” Mrs. Zuckerman said.

The Zuckermans paid $2.9 million for their four-bedroom, six-bathroom residence in the north tower, which they customized, including expanding the kitchen and adding storage space and custom cabinetry. It’s a very social building, Mrs. Zuckerman said. “It feels like camp in very good style.”

It was important to the Mitchells that their project had a community feel. “I grew up here,” Ms. Mitchell said. “Our bedroom is where my grandmother’s kitchen used to be.”

Their sixth-floor unit cost $4.5 million. Four bedrooms and four and a half baths are laid across 3,752 square feet of living space. A maid’s quarters has been transformed into a children’s den.

The condo has floor-to-ceiling windows offering a nearly panoramic view. Almost every room opens onto the 2,688-square-foot wraparound balcony that has a 100-square-foot plunge pool.

“Our terrace is great for entertaining; we can fit 100 people on the deck,” Ms. Mitchell said.

The success of the project prompted the Related Group to replicate a similar luxury-living-on-the-sand concept six miles north in Pompano Beach.

Auberge’s residences have been a test for other luxury developers.

Mr. Ashi of Fort Partners said international buyers were coming from Europe, Mexico and Brazil, while domestic buyers were arriving predominantly from the Northeast and South Florida.

“For some of our buyers, Palm Beach is too slow and Miami is too fast,” said Dan Teixeira, vice president for business development at Douglas Elliman Development Marketing. “In Fort Lauderdale, they get the best of both worlds.”

Joanne and Vincent Intrieri, a semiretired couple who lived in Manhattan for more than two decades before relocating to South Florida two years ago, will move from Miami to Fort Lauderdale once their Four Seasons residence is completed.

The couple bought the 2,300-square-foot unit for $3.4 million as soon as it came on the market. Prices have risen since then.

“Our condo is on the northeast corner of the building, so we have ocean as well as city views,” Ms. Intrieri said. “I didn’t want to look into a black hole at night.”

While the unit is technically a two-bedroom with three full marble bathrooms, the Intrieris plan to convert the den into a guest bedroom with a Murphy bed and one of the master bedroom’s walk-in closets into an office.

“There’s a lot of flexible space to play with,” she said.

Ms. Intrieri said she felt that Fort Lauderdale, which Forbes ranked as one of the country’s fastest-growing cities in 2018, was what Brooklyn was to Manhattan years ago.

It’s up-and-coming, and you get more for your money, she said, adding, “We get the quality of life of a resort community, but we can still can walk to nice restaurants, and there are lots of things to do.”

The City Commission is investing in improvement projects, earmarking $200 million to create more parks and greenways.

The Riverwalk, Las Olas Marina and the airport are getting upgrades. An 18,000-seat soccer stadium debuted, a $65 million privately funded Panthers training facility with public skating rinks has been approved, and the city’s aquatic complex is under renovation.

And the Brightline has high-speed rail service from downtown Fort Lauderdale to Miami, West Palm Beach and, in 2022, Orlando International Airport and Walt Disney World.

Other luxury developments are in the pipeline. Tavistock Group bought the Pier 66 Hotel & Marina and the Sails Marina for $187 million with plans to combine them into a unified 32-acre waterfront property featuring 164 deepwater slips and about 575 high-end residential units near the beach. The project is expected to open in 2023.

“Things are happening fast,” Mr. Ashi said. “In five to 10 years from now, Fort Lauderdale will be a totally different place.”

The word of the day is "upskill." You'll probably be hearing a lot of it when it comes to employers as they provide additional training for their staff."This is an employee market now," said Christine … END_OF_DOCUMENT_TOKEN_TO_BE_REPLACED

All through his campaign for the presidency, candidate Joe Biden promised as president that he would use every tool at his disposal to curtail private gun ownership. As recently as April, President … END_OF_DOCUMENT_TOKEN_TO_BE_REPLACED

The Sports Castle building in Denver. (Photos courtesy of Non Plus Ultra) A California-based firm is looking to bring life to some of Denver’s more prominent vacant structures, but only for a limited … END_OF_DOCUMENT_TOKEN_TO_BE_REPLACED