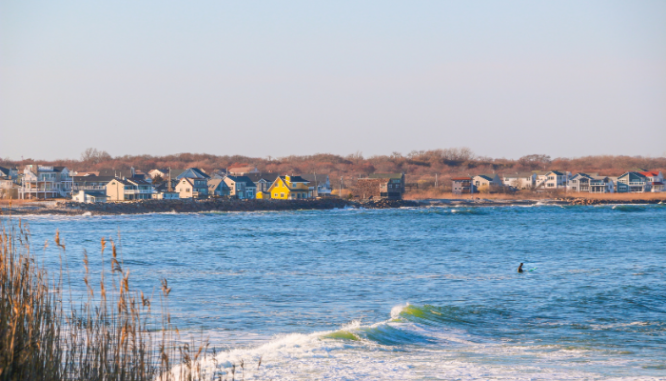 You are a stern and hardy Puritan settler in the 17th century. Your hands calloused and raw, you build a simple, utilitarian shelter that you pray will allow your family to survive the harsh winter on the horizon.Centuries later, your ancestors exclaim, “How cute!”

You’ve seen them. One and a half stories tall. A steep, shingled roof with its triangular gables facing left and right. A simple front door in the middle, flanked symmetrically by shuttered windows on clapboard siding.

Cape Cods — or “Capes,” for short — are downright charming. What’s it like to live in one? Let’s take a look at their history, and at the advantages and challenges they offer today.

The very term “Cape Cod house” brings visions of bulky knit sweaters and sunsets over the bay while you sip a highball and the ocean breeze ruffles your hair. But every charming detail is a product of the harsh environment of the colonial Northeast.

The huge, fairy-tale-cottage chimney? It provides much needed warmth to the small rooms surrounding it.

Nonstop punishment from the salty air gives the cedar shingles their trademark silver color, and the enchanting, steep “captain’s stairway” provides space-saving access to storage in the attic. Ingenuity thrives in small spaces and harsh environments.

But the end result is, undeniably, cute. And most early Capes (1690s to 1850s) were even tinier than the full Cape described above.

There were two smaller styles, now rare: the “half Cape,” which had a single, off-center door with two windows to one side, and the “three-quarter Cape,” which was a smidge wider and added one window to the opposite side of the door. These are sometimes referred to as the “starter homes” of the early settlers.

Could you settle in a Cape?

We spoke with top-performing real estate agent Jeffrey Huss of southeast Pennsylvania about the pros and cons of owning these simple houses. He’s spent 22 years introducing buyers to their homes, but what other expertise does he bring to the subject?

Capes are “typically not the most popular, and not sought after, necessarily,” Huss tells us. As charming as they are, they aren’t for everyone.

More people go after colonials, which provide a similar aesthetic in a larger size. But for the right buyer, with a small family and a moderate amount of possessions, a Cape can be a house with a cozy embrace.

“I call it the perfect downsize house, because if you live in it and it’s full, and then kids move out, you just kinda close off the second floor and live on the first floor.”

But make no mistake: A Cape can expand, too. In fact, they’re very good at it …

In the early- to mid-20th century, architect Royal Barry Wills became enchanted with the Cape Cod house, and he set out to perfect it. He had strong opinions about what made good design or bad design in a Cape.

He wanted to make sure, for example, that the roof wasn’t too tall, and that the house had a “low, ground-hugging look.” The Cape Cod is at its most perfect when it seems to nestle (cozily!) into its surroundings.

But while Wills was intent on preserving the integrity of the Cape, he also knew that the house had to evolve to allow for modern necessities. Luckily, since the style is practically a building block already (“Basically, it’s kind of a box,” Huss tells us), it’s relatively easy to add space.

Wills’ designs featured gabled dormers peeking from the attic, which by this point had made the transition from storage space to livable second floor. He also encouraged well-proportioned wing additions to the sides, as well as concessions for more modern conveniences like plumbing and heating.

This was part of the Cape Cod Revival, when the style surged in popularity — just in time for the post-World War II housing boom. Once again, when shelter was needed, the Cape stepped up to the task.

“The people who were in the house before me actually built a room off the side of it, right off the kitchen,” Huss says. And “most people nowadays, they renovate a Cape by placing a staircase in the middle. And then taking that attic space, which is usually fairly large, and making it into two bedrooms and a bath.”

Adaptation: from Colonial to current

In fact, it’s pretty rare to find Capes that haven’t been altered. We spoke to experts Jay Rizzo and Michael Healy of Tiger Home Inspection, a highly rated company in Braintree, Massachusetts.

“Once in a while, you come across an older couple living in an undormered Cape with an unfinished second floor, and it’s like being in a time machine,” Healy tells us.

But Rizzo says they do see a whole range of Capes from different time periods: “everything from Puritans to yesterday.”

They share a tale of an engineer who lived in a centuries-old Cape and maintained it meticulously, close to its original condition (“not a stitch of insulation, single-hung windows”). The key is to make sure the pipes are insulated enough to prevent freezing, use certain rooms less frequently to reduce heating costs, and most importantly, “make enough money to pay the heating bill.”

Between Royal Barry Wills and Rizzo’s engineer, it’s clear that Capes inspire loyalty and passion — enough to last the rest of your life. (“People don’t move out of Capes, they get taken out,” Healy jokes.)

“You get more bang for your buck by buying a Cape Cod,” Huss tells us. “They’re a little bit less expensive than the more popular colonial.”

Capes are adorable, adaptable, and affordable. But, as you might have guessed, they may have some downsides.

“Cute and charming” usually translates to “small,” and your traditional Cape is going to be about 1,200 to 1,800 square feet. Huss mentions a quip he once read:

You can invest in expansions, you can wait until the kids move out, but all the small space tricks in the world won’t create a huge, luxurious bedroom with a private bath in your little Cape.

“When I go to look at a Cape,” Rizzo tells us, “I look at the attic space, and I’m looking for insulation and ventilation conditions and methods.”

That steep roof is good at shedding snow — to a point. If the attic of a Cape has been converted to living space without enough thought put into the insulation, you could find yourself with an ice dam.

Here’s what happens: A thin layer of roof between the warm interior and the cold exterior causes the snow above the attic to melt. The water makes its way down the slope … until it reaches the eave overhanging the outer wall of the house. Suddenly, there’s no warmth below the water, and it refreezes there. Then, more snow melts and refreezes, causing more and more buildup, until you have massive icicles outside — and dripping water inside.

Those characteristic shingles also take a lot of abuse from the inside/outside temperature difference. “Shingles may have a dramatically shorter life span in a Cape than in other styles,” Rizzo says, “because the structure doesn’t allow for much attic area air circulation. … Condensation forms on the roof back and the shingles, and there’s not as much attic space or air movement to help them dry out,” potentially resulting in mold.

The more recent the build (or renovation), the more likely you are to have modern conveniences. But old Cape Cod houses are still around, with your standard old-house problems: uneven floors, outdated kitchens, unfinished basements. If you’re not looking for a renovation project, narrow your search to more modern Capes.

So there you have it. Born of necessity and coming of age with America, the Cape Cod is a historic housing style with tons of charm and curb appeal. Can you see yourself settling into one, long term?

The word of the day is "upskill." You'll probably be hearing a lot of it when it comes to employers as they provide additional training for their staff."This is an employee market now," said Christine … END_OF_DOCUMENT_TOKEN_TO_BE_REPLACED

All through his campaign for the presidency, candidate Joe Biden promised as president that he would use every tool at his disposal to curtail private gun ownership. As recently as April, President … END_OF_DOCUMENT_TOKEN_TO_BE_REPLACED

The Sports Castle building in Denver. (Photos courtesy of Non Plus Ultra) A California-based firm is looking to bring life to some of Denver’s more prominent vacant structures, but only for a limited … END_OF_DOCUMENT_TOKEN_TO_BE_REPLACED