American homebuyers persevered through high prices and fierce competition in 2021 and 2022, but few landed their dream home as 80% reported compromising on their priorities, according to a new report from Anytime Estimate. First-timers paid a median of $77,500 over the listing price, while repeat buyers offered only $60,000. Although finding an affordable home was the second-most important priority among home buyers compared to the first —which was finding a home in a good neighborhood— more than 57% of survey respondents purchased a home that cost more than the national median price of $428,700.The most common sacrifice buyers made was on price. Additionally, approximately half of buyers —or 45% — wanted an affordable home, but more than 35% had to offer a higher price.

Despite high prices, low inventory and fierce competition over the past two years, buyers have persevered through the challenging market. Yet few came away with their dream home —especially first-timers who accounted for 70% of buyers in 2021 and 2022. Of those shares, approximately 66% were millennials who were eager to own homes to raise their families. Due to this competitive market and lack of inventory, many Americans were forced to compromise in order to afford a home.

Although 50% of respondents said that finding a home in a good neighborhood was their number one priority, 20% reported settling for a home in a less-desirable neighborhood. To keep up with the fast-paced market, 80% of buyers made more than one offer, with 41% making five or more. In addition, house hunts took one month or more for 61% of buyers, including 12% who looked for six months or longer before their offer was accepted. 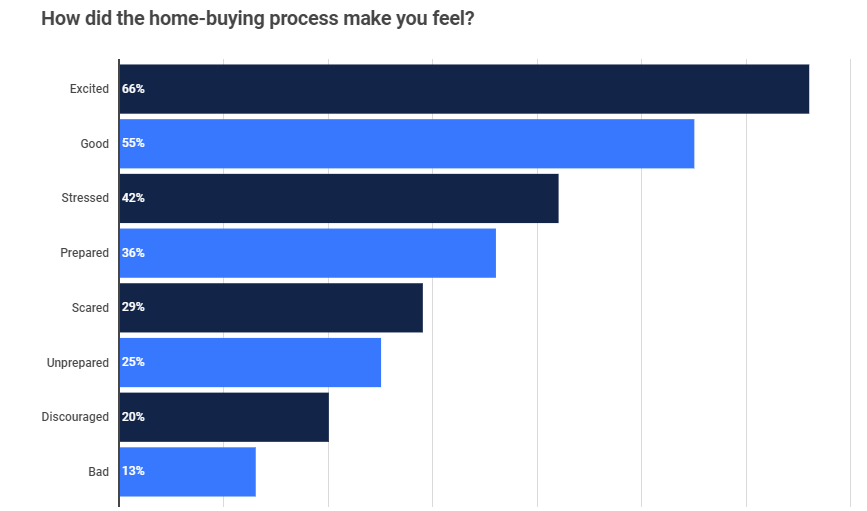 In the past, real estate agents have suggested offering 1%–3% more than the asking price, but today’s home buyers are exceeding that recommendation to beat the competition. Of those who paid more than asking price:

First-time home buyers dominated the market in 2021 and 2022, with 70% of recent buyers indicating they were making their first home purchase. First-time buyers struggled to submit attractive offers, as they were 1.6x more likely than repeat buyers to submit at least 10 offers and to make risky moves such as making an offer sight unseen. First-timers also paid a median of $510,000 for a home in 2021 and 2022 —roughly 13% more than the $450,000 that repeat buyers paid.

The survey also revealed that nearly one-fourth of all buyers —or 22%— weren’t satisfied with their home-buying experience, and 88% said the competitive housing market impacted their experience. Forced to make decisions on the spot, it comes as no surprise that nearly 3 in 4 recent home buyers have regrets about their purchase, including spending too much (30%) and buying too quickly at (26%).

To read the full report, including more charts and methodology, click here.

Ginnie Mae’s outstanding mortgage-backed securities portfolio grew for the 13th consecutive month in July, hitting $2.252 trillion, up from $2.229 trillion in June and $2.117 trillion one year ago. … END_OF_DOCUMENT_TOKEN_TO_BE_REPLACED

New Western, the largest national private marketplace for fix-and-flip residential investment properties, announced today that the company has made homeownership accessible for more Americans by … END_OF_DOCUMENT_TOKEN_TO_BE_REPLACED

The newest national survey of new homeowners commissioned by U.S News & World 360 Report Reviews found that a majority of new homeowners who purchased a home since the beginning of 2021 reported that … END_OF_DOCUMENT_TOKEN_TO_BE_REPLACED

A $30 million funding package is backing construction of a 228-unit apartment complex in Rogers. STL 2 Rogers LLC, an affiliate of Missouri-based developer Mia Rose Holdings, secured the loan from … END_OF_DOCUMENT_TOKEN_TO_BE_REPLACED