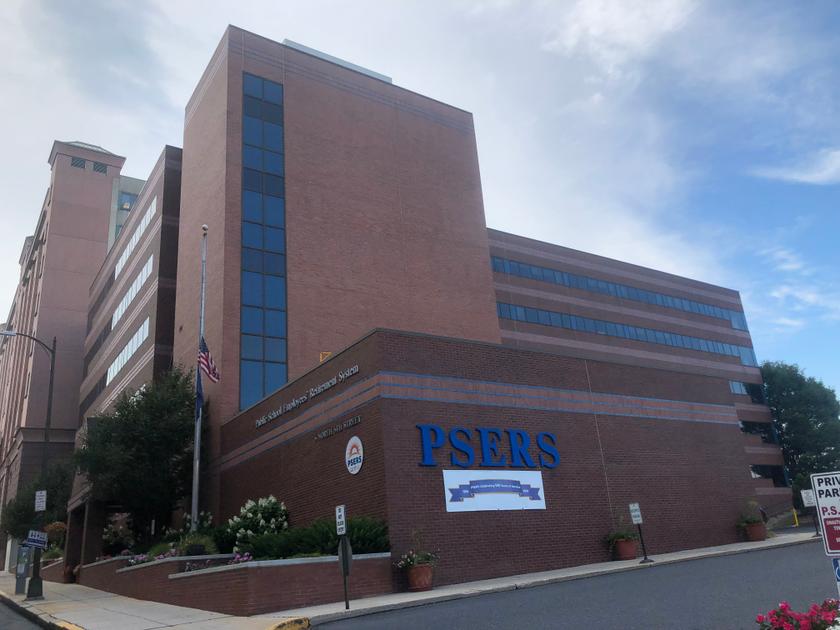 HARRISBURG — Amid an FBI investigation, the mammoth PSERS pension plan has disavowed as poorly worded an official disclosure form that said its top investment staff was also being paid by a firm hired to manage its real estate in Harrisburg.

The fund said that in fact no one on its staff had received any “additional compensation” even though the forms said they were paid employees of both the retirement plan and the realty firm. The $64 billion fund said it has filed replacement disclosures with the IRS “correcting this error.”

The plan’s announcement came in response to questions from Spotlight PA and The Inquirer — and after federal prosecutors had subpoenaed information about PSERS’ $1.6 million purchase of the former Harrisburg Patriot-News building at 812 Market St. near the plan’s office and purchases of other nearby properties.

PSERS said it has amended the required public disclosure forms for the nonprofit, 812 Market Inc. created in 2017 to hold the title to the Harrisburg real estate. Unamended, the forms say that PSERS’ chief investment officer, James H. Grossman Jr., and two of his staff are on an 812 Market Inc. board whose officers include top executives of PMI Property Management, Inc., the Harrisburg-area company that looks after the real estate.

While the original forms say in one section that Grossman and the others received no money through their board membership, the records also say elsewhere that he and the others, deputy Charles Spiller and senior real estate manager William Stalter, work for PMI and are paid by it.

Grossman is the highest-paid employee of the state of Pennsylvania, making $485,421 a year. Spiller (and another Grossman deputy) are the 2nd highest, making $399,611. Spiller is the fund’s leader on real estate investments and briefs its board on such buys. Stalter, who is also a real estate expert, is paid $241,801.

Efforts to reach the three PSERS officials were unsuccessful. The PMI executives, Eric Kunkle and David Dyson, declined comment. PMI was paid $30,000 yearly in the last fiscal year, to manage the properties. No one has been charged with any crime in connection with the federal probe of PSERS.

PSERS is short for the Pennsylvania School Employees’ Retirement System. One of the nation’s biggest pension plans, it sends out more than $6 billion in checks yearly to 265,000 former teachers and other retired staff from public schools. It is supported by its investments and by payments from working educators and taxpayers.

The image of the fund, which has faced growing criticism for its unremarkable investment returns, has taken a beating since news broke in March of the federal investigation. As Spotlight PA and The Inquirer have previously reported, federal prosecutors and the FBI are using a grand jury and subpoenas to investigate the Harrisburg real estate purchases, as well as the board’s adoption last year of a figure that falsely exaggerated its investment profits. The board later reversed course in April, and said it would require more recent school employees to pay more for their retirement, starting July 1.

State Sen. Katie Muth (D., Montgomery), who became a PSERS board member this year, said Monday that she had asked the fund’s management weeks ago for information about the nonprofits and the Harrisburg real estate investments, but had never received answers. The response, she said, was: “We are still looking into it.”

In its statement Monday, the retirement system said it created nonprofits to own real estate as a buffer against lawsuits “to limit legal risk.”

PSERS did not say when it filed the revised forms. As The Inquirer and Spotlight have previously reported, federal prosecutors sought information about the Harrisburg real estate in subpoenas dated March 24. At a May 5 board meeting closed to the public and the media, lawyers from the Morgan Lewis firm, one of three firms hired by PSERS to address the FBI probe, briefed the board about the disclosure forms and said it was looking into whether the staff was paid by the real estate firm and whether the board even knew that the nonprofits had been formed, sources said.

The fund has created about a half-dozen nonprofits to hold titles to its 15 or so real estate investments around the nation, IRS records show. While the statement Monday cites only one, 812 Market Inc. public records show that the same flawed language is in the filings for two other PSERs nonprofits, one for its headquarters buildings and another for a mall property in San Antonio, Texas.

Before the board issued its statement, reporters asked Charles Elson, a finance professor at the University of Delaware and an expert on corporate governance, to examine the filings, known as 990s, named for their official IRS form number. He said they were either “poorly worded” or revealed an obvious conflict of interest for PSERS.

“It puts those individuals on both sides of the transaction,” Elson said. “You’re an employee of the pension system, but why are you working with and being paid by an entity that does business with the pension fund?”

While PSERs puts its billions mainly into stocks, bonds, and private-equity businesses not on the stock market, it has also directly acquired some real estate, buying properties worth $1.1 billion. Its holdings are eclectic — too much so, critics say — ranging from a mall in Ft. Lauderdale to mobile-home parks in Michigan to a pistachio orchard in California.

In 2017, PSERS began buying properties closer to home. The agency has been secretive about the purchases, keeping plans confidential. Beyond demolishing the Patriot-News building, nothing visible has been done to the real estate. At one point, fund executives told the board that the plan might partner with Harrisburg University of Science and Technology on an office tower, but the university said recently that nothing had come of that.

Its first major Harrisburg purchase was the $1.6 million buy late in 2017 of the Patriot-News printing plant and offices. Over the next three years, the fund spent another $1.4 million to buy seven more properties, a mix of buildings and parking lots. Internal fund documents say it has spent as much as another $7 million on demolition and “site-development costs.”

In another PSERS development, the fund on Monday issued a separate statement about its decision to pay for private lawyers for eight unnamed staff members. It issued the statement a day after The Inquirer published a story about how the agency will pay up to $40 million in total legal bills in any one year for staff caught up in one investigation. The fund will also keep paying employees’ defense lawyers right up to the outcome of any trial.

The fund said it would be “patently unfair” to force its staff to pay themselves for lawyers and said that that fund could recoup any money if “an employee is later found guilty of a criminal offense.”

WHILE YOU’RE HERE… If you learned something from this story, pay it forward and become a member of Spotlight PA so someone else can in the future at spotlightpa.org/donate. Spotlight PA is funded by foundations and readers like you who are committed to accountability journalism that gets results.

The word of the day is "upskill." You'll probably be hearing a lot of it when it comes to employers as they provide additional training for their staff."This is an employee market now," said Christine … END_OF_DOCUMENT_TOKEN_TO_BE_REPLACED

All through his campaign for the presidency, candidate Joe Biden promised as president that he would use every tool at his disposal to curtail private gun ownership. As recently as April, President … END_OF_DOCUMENT_TOKEN_TO_BE_REPLACED

The Sports Castle building in Denver. (Photos courtesy of Non Plus Ultra) A California-based firm is looking to bring life to some of Denver’s more prominent vacant structures, but only for a limited … END_OF_DOCUMENT_TOKEN_TO_BE_REPLACED