DeSales Community Development announced this week the submission to the Missouri Housing Development Corporation of an application for Low-Income Housing Tax Credits to help cover some of the cost to build a new apartment building at the southwest corner of Jefferson and Arsenal in the Benton Park West neighborhood. The proposed building would have 49 apartments (29 1-bedroom, 20 2-bedroom) for seniors. The architect is Nathan Rauh from Naismith-Allen, Inc. Announcement. 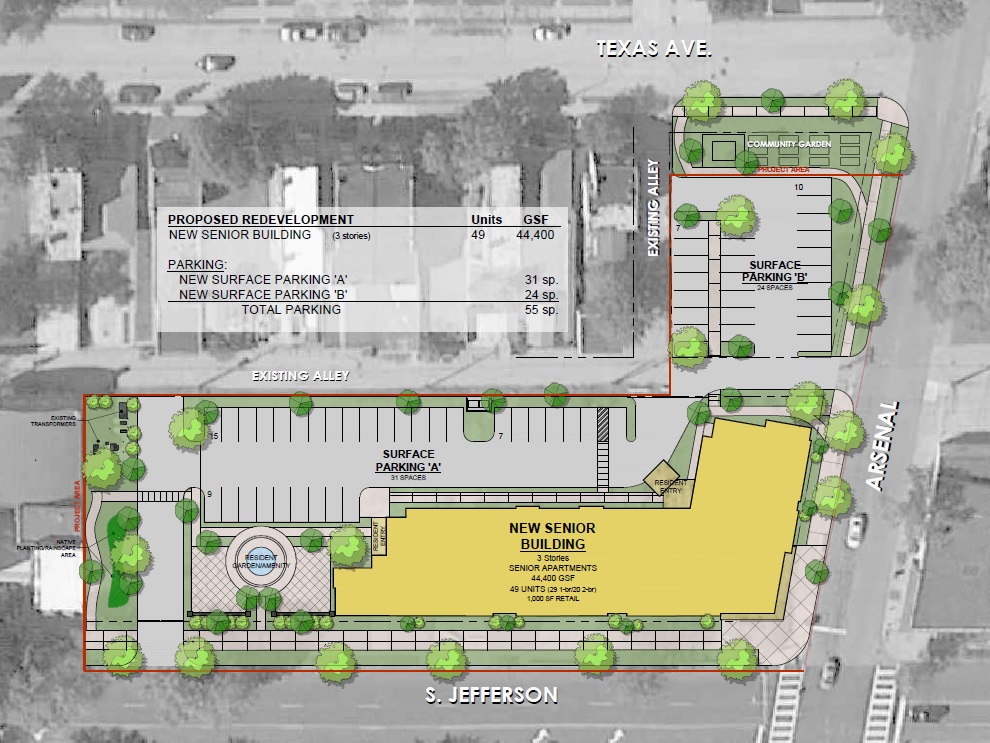 The site consists of the vacant lots along Jefferson as well as at the southeast corner of Arsenal and Texas Ave. The land is currently owned by the LRA. The community garden would be moved to the western edge of the property by Texas Ave. A 1,000 sf retail bay would be at the corner of Jefferson and Arsenal. There are 55 surface parking spaces and a curb cut on Jefferson. Benton Park across Jefferson will be a nice amenity for residents. Enhancing pedestrian safety at the intersection should be a priority. Curb bump outs are a no-brainer.

The Gravois-Jefferson Neighborhoods Plan on p 106 references this site- “Vacant parcels owned by the City, such as the site at the southwest corner of Jefferson Avenue and Arsenal Street, should be prioritized because of site control. Market the site by issuing a request for proposals to attract a developer for the highest and best use.” On page 306 it lists the demand for affordable senior housing as “deep” that could go on “Large underutilized catalyst sites.” On page 151-

The site is served by the 11 Chippewa on Jefferson and the 30 Arsenal buses. 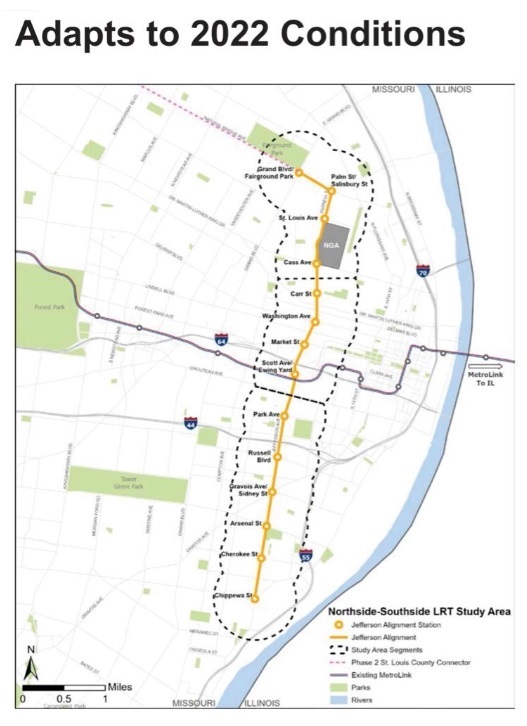 The amount of parking is unfortunate. Especially so since the planned Northside-Southside Metrolink line would have a station at this intersection. Space for cars wastes about half of the 1,25 acre site. There is about 500 feet of street parking space around the perimeter. Here’s hoping the Arsenal-Texas portion is developed into something more productive some day.

The project is contingent on the LIHTCs, which DeSales should hear back about in December.

KANSAS CITY, Mo. — The Amtrak Missouri River Runner service, traveling back and forth between Kansas City, Missouri, and St. Louis, is shifting its service from two trips between the cities per day, … END_OF_DOCUMENT_TOKEN_TO_BE_REPLACED

KANSAS CITY, Mo.  — A new development could soon make its way to the Waldo neighborhood in Kansas City, Missouri.“Waldo is like one of those perfect little gem neighborhoods,” said Will Kivinski, who … END_OF_DOCUMENT_TOKEN_TO_BE_REPLACED