Wages are up, but homebuyer budgets have remained flat over the past three months, meaning the market is seeing its slowest growth rate in two years.

This information comes to us from a new analysis by Redfin which found that the average budget users set on its website have only increased by 0.3% from the first of the year to the end of April.

In comparison, according to the Federal Reserve Bank of Atlanta, average gross wages grew 5% over the last year.

According to Redfin, declining budgets are a “leading indicator” that home-price growth has passed its peak and is expected to slow in the coming months.

The flattening of budgets is also a sign that rising mortgage rates are having a “major impact” on how much money buyers can spend on homes as more of their money will go towards interest payments.

Recently, Redfin found that budgets hit a peak growth rate of 12.2% in April 2021 which was three months before home-sale prices hit their peak growth rate of 22.6% in July 2021. Redfin’s economists further predict that the cooldown in budgets will lead to a slowing in price growth by two to three months’ time as buyers typically search multiple outlets online for months before making a purchase. Sellers are slower to adjust to the cooling market, but they are starting to react to buyers’ declining budgets: 21% of home sellers dropped their asking price in the last four weeks—up from 10% a year earlier. 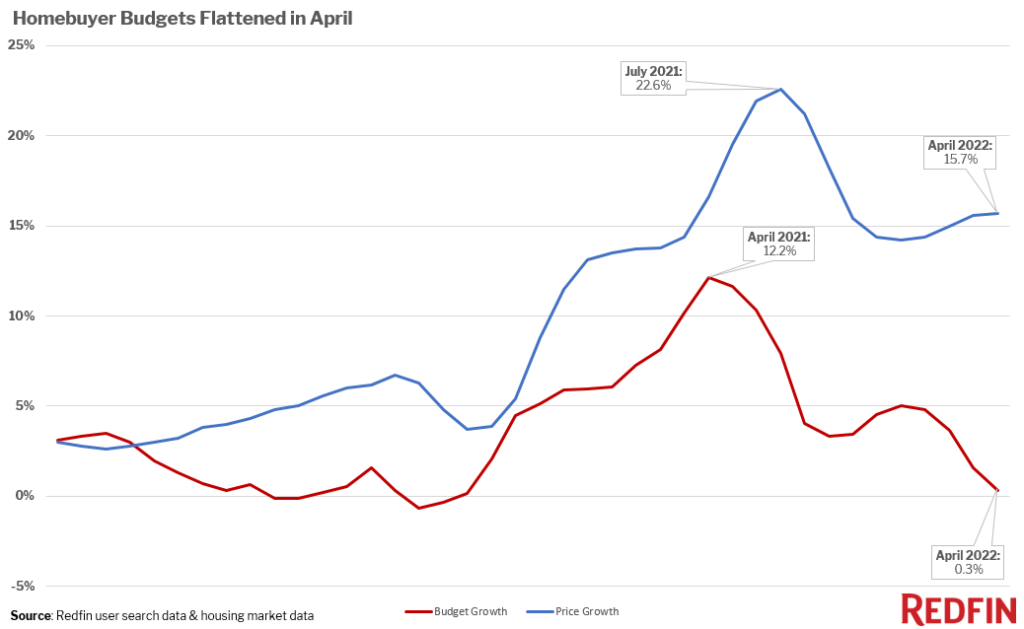 Budgets began flattening at the beginning of the year. Budgets saw a 5.1% increase year-over-year in December, but have declined every month since. The cooldown coincides with sharply rising mortgage rates. Mortgage rates hovered around 3% for most of 2021, and now they’re sitting around 5.2% after a record-fast increase that started in January.

“When mortgage rates go up, buyers’ budgets go down,” said Taylor Marr, Redfin’s Deputy Chief Economist. “And when buyers’ budgets go down, sellers have to meet buyers where they are. Budgets haven’t fallen from a year ago and we don’t expect home-sale prices to fall, either. But the fact that budget growth has slowed so significantly is one sign among many that home-price growth will continue to slow as the year goes on.”

Redfin concluded by saying that slowing price growth is good news for homebuyers, but buyers will still have to balance that with rising interest rates. Sellers should keep in mind that buyers can be sensitive to fluctuating interest rates and should price their home accordingly because buyers are beginning to claw back some of its power from sellers.

“Buyers are qualified to borrow less money because of rising rates, which means they’re searching for less expensive homes,” said Fresno Redfin agent Dennis Rozadilla. “There’s still limited supply and a surplus of buyers, but buyers are pickier now and their budgets are more limited.”

KANSAS CITY, Mo. — The Amtrak Missouri River Runner service, traveling back and forth between Kansas City, Missouri, and St. Louis, is shifting its service from two trips between the cities per day, … END_OF_DOCUMENT_TOKEN_TO_BE_REPLACED

KANSAS CITY, Mo.  — A new development could soon make its way to the Waldo neighborhood in Kansas City, Missouri.“Waldo is like one of those perfect little gem neighborhoods,” said Will Kivinski, who … END_OF_DOCUMENT_TOKEN_TO_BE_REPLACED