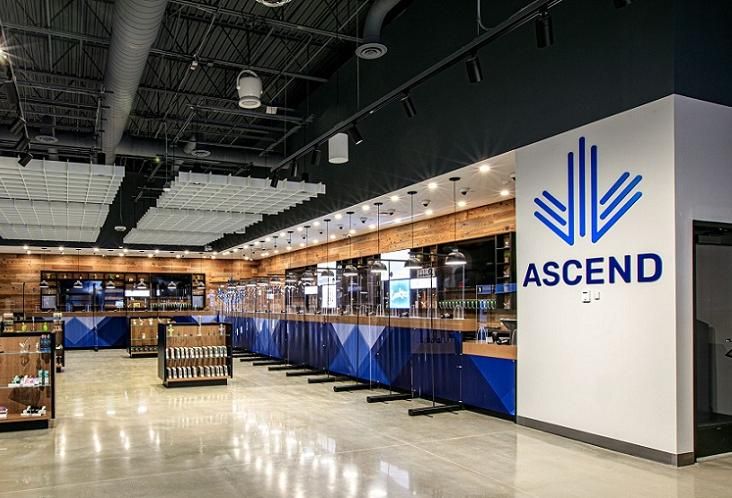 The state’s beleaguered retail sector may be on the verge of getting a much-needed shot in the arm. After a year of delay, lotteries for the state’s coveted cannabis dispensary licenses were held in July and August, and even though legal disputes could still upend the whole process, the lucky winners are already out in the market hunting for retail spaces.

“It’s kind of a mad rush to get everything in line,” Mosaic Construction Business Development Manager Albert Marks said. The Northbrook, Illinois-based firm has constructed dozens of cannabis dispensaries and grow facilities nationwide. Illinois’ lotteries mean business is picking up.

“Our email box is already filling up and our phones are ringing,” he said.

The first dispensary lottery in 2019 led to a Wild West-style scramble for spaces, with many license holders plunking down deposits and signing letters of intent for more properties than they could occupy.

This time, the scramble will be bigger and more lucrative for property owners. Not only has the state more than doubled the number of dispensaries, but the booming sales of recreational cannabis ever since it was legalized in January 2020 proved its vendors are valuable tenants, ones that paid premium rents even as the coronavirus pandemic gutted other retailers.

“We just came off a tumultuous 2020, and a lot of restaurants and bars are gone, but all of the cannabis guys are still there,”  The Lord Cos. President and Managing Partner Keith Lord said.

The Chicago-based owner and developer added that some of the stigma attached to cannabis products, still illegal under federal law, has dissipated among landlords. Many feared weed sales would attract criminal activity or disorder, but the first 110 dispensaries have largely operated without controversy.

“Property owners have gotten more comfortable with cannabis because there is a perception that it’s less risky,” Lord said.

More than $1B of legal cannabis was sold in Illinois in 2020 and recreational providers paid $175M in state taxes.

Legal cannabis use began in Illinois in 2014 when the state authorized the sale of medicinal weed and 55 such dispensaries were established. Those providers were the only ones allowed to compete for the first 55 recreational dispensary licenses, awarded in late 2019.

After that, the rollout hit a series of bumps. Hundreds of applicants competed in 2020 for 75 social equity licenses meant to foster minority-owned cannabis businesses in communities heavily impacted by the nation’s long-running war on drugs. But state officials only approved 21 groups, including many White-owned businesses, and lawsuits from both the winners and losers began flying back and forth.

Several lawsuits remain outstanding, but after Gov. J.B. Pritzker signed new legislation this year that redesigned the approval process, the state went ahead and held a series of lotteries this summer, for both the social equity applicants and all others, awarding a total of 185 licenses. A Cook County judge still has to give formal approval.

The multi-state cannabis operator, one of the nation’s largest, has 10 dispensaries in Illinois, the maximum allowed, and it did not participate in the recent lotteries, although it assisted several social equity applicants.

Lord is already talking with several winners of the state’s latest lotteries about signing new retail leases, both for his own properties and those the company manages for others. He could not disclose details about the negotiations, but he said these prospective tenants, and many landlords, are eager to get started.

“Some are putting up non-refundable deposits to hold onto spaces,” Lord said. “We’ve also had landlords require that we go out and talk to cannabis tenants.”

That’s a sea change from the unfriendly reception cannabis sometimes got when medical use was legalized, according to SVN Chicago Commercial Vice President Deena Zimmerman, who began representing cannabis clients in 2013.

“I used to get hung up on,” she said. “But a lot of retail space has sat vacant for a long time and the pandemic didn’t help, so a lot of people are far more open to cannabis.”

The early days of cannabis meant cold-calling landlords and brokers, Zimmerman said. Now they come to her. In one case, an owner of a retail space in suburban Chicago pitched it as perfect for one of her fast-casual restaurant clients, asking $33 per SF. That deal fell through, so the owner then unsuccessfully pitched it as suitable for a medical clinic. The space is still vacant and the owner came back a month ago with another idea.

“They called and said they just wanted me to know that the village is open for cannabis use and that this was a cannabis-approved site,” Zimmerman said.

But the new opportunity to occupy that suburban space comes with a hitch.

“Because it’s for cannabis, they’re now asking for $60,” Zimmerman said.

She calls that a green tax. It’s also a sign that even though landlords love the big money brought in by cannabis sellers, it’s still not a fully normalized category of retail. The federal prohibition puts the product in a legal gray zone, and banks won’t let their mortgage holders accept cannabis tenants. In addition, Illinois law prohibits dispensaries from being within 1,500 feet of each other, and municipalities usually impose other restrictions on where cannabis can be sold. That cuts down the number of buildings dispensaries can occupy and pushes up the asking rents for what’s available.

“Bank of America will not permit landlords to collect rent paid with cannabis dollars,” Erkes said. “We don’t have many landlords say, ‘We don’t want you as a tenant,’ but we do have many who say, ‘We can’t take your money.’”

Courtesy of Village of Skokie

The CEO of a group that won a dispensary license for a Downstate location after participating in all three lotteries held this summer told Bisnow it may be difficult to find a suitable spot. Local government officials won’t allow dispensaries near residential areas, heightening the competition among the firms just selected for licenses.

“There are three of us all circling around the same small town,” he said.

Even though it can be challenging to find spaces, Zimmerman said charging nearly double the rate of traditional retail isn’t workable for this new round of cannabis dispensaries. The more welcoming attitude among landlords has changed the market, even if it’s still difficult to pass muster with local zoning boards and cautious lenders.

“There is a big delta between landlords and tenants about what the premium should be,” she said. “But we can now be a little bit picky and more thoughtful in this process.”

That swing is nationwide, according to Joshua Joseph, CEO of Big Plan Holdings, a Nashville-based family office that invests in cannabis operations.

“We’re continuing to see a shift to Main and Main-style locations, like a Starbucks, and no longer having to be put in the back of an industrial park,” he said.

Joseph was also founder and director of real estate for Grassroots Cannabis, a Chicago-based firm sold for more than $800M in July 2020 to Curaleaf, another multi-state operator with 10 Illinois dispensaries. Such corporate giants can afford to buy those Main and Main-style locations outright, avoiding lenders’ prohibitions. But many cannabis operators, especially the social equity groups, are entrepreneurs without deep financial reserves.

Joseph said one way forward for these groups is to forge partnerships with investors such as Big Plan Holdings, which can own the properties leased by cannabis entrepreneurs.

“We don’t do this for everyone,” Joseph said. “It has to be the right person and the right real estate. But we will 100% work with social equity applicants and I am talking to several right now about real estate opportunities in Illinois.”

The new license holders have big jobs ahead, Marks said. They have to start contacting architects and contractors who can create dispensaries, evaluate properties and delve into their region’s zoning, rules and regulations. That’s a financial investment. And until all the legal cases are settled, it’s a gamble.

“It’s an exciting time, but like everyone else, we’re dealing with some unknowns,” he said.

The word of the day is "upskill." You'll probably be hearing a lot of it when it comes to employers as they provide additional training for their staff."This is an employee market now," said Christine … END_OF_DOCUMENT_TOKEN_TO_BE_REPLACED

All through his campaign for the presidency, candidate Joe Biden promised as president that he would use every tool at his disposal to curtail private gun ownership. As recently as April, President … END_OF_DOCUMENT_TOKEN_TO_BE_REPLACED

The Sports Castle building in Denver. (Photos courtesy of Non Plus Ultra) A California-based firm is looking to bring life to some of Denver’s more prominent vacant structures, but only for a limited … END_OF_DOCUMENT_TOKEN_TO_BE_REPLACED